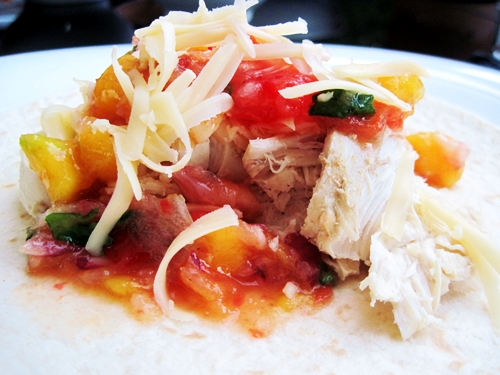 I’ve heard rumors that the U.S. is currently experiencing some kind of heatwave. (And, by “rumors,” I mean that I’ve heard more about the sweltering  temperatures on the east coast these past few days than I have about the debt crisis. And Amy Winehouse. Combined.)

Well, here in Germany, we have to make our own heatwave, ’cause the weather certainly isn’t doing much work for us. The past week has been rainy, cloudy, intermittently sunny, then rainy again. Oh, and around 65 degrees. Not that I really mind that last bit. This summer could be my only opportunity to wear tights between May and August. I’m seizing it.

Thus, Germany’s temperamental approach to sunshine necessitates that we eat the heat rather than beat the heat.

1) Combine all ingredients in a saucepan and add water to just cover the chicken. Turn heat to high, bring to a boil, and skim any foam that comes to the surface.
2) Partially cover the pan and adjust heat so mixture simmers steadily. Cook until meat is very tender, about 30 minutes. Remove from liquid and let cool.
3) Shred meat with fingers. Pile onto a tortilla and top with your favorite taco fixings. I opted for tomato and mango salsa, cheddar cheese and sour cream.

It’s difficult to say exactly when Southern culture wooed its way into my heart and spread, like kudzu, straight into my stubborn Yankee soul. Born in New York and transplanted before I could even start school, I felt like a vagabond. A Girl Without a Region. So, I clung to the only identity I thought I had, knowing that any real Southerner would pronounce me a fraud the moment I opened my mouth and produced any word with a short “o” sound. (“D-aw-g,” “aw-fice,” and “c-aw-fee” were all dead giveaways.)

For much of my adolescence, I fought valiantly against any influences that hailed from below the Mason-Dixon line. In my earliest years in North Carolina, I argued with countless other children that “y’all” was merely a contraction and not, in fact, a real word. I refused to participate in our high school tradition of wearing camouflage and neon orange to football games. For that matter, I refused to acknowledge football, period. I always chose Dunkin’ Donuts over Krispy Kreme during “which is better?” doughnut debates.

Over the years, I made a few concessions. I went to Bojangle’s for lunch, on occasion. I began saying “ma’am” when I got my first job. I learned to slow down. (Or, rather, I tried to learn. I’m not entirely sure I am capable of the task.) Sometimes, I ate Krispy Kreme donuts. And liked it.

As I’m sure you can guess, I learned to love the South through food. Maybe it was the cold, crunchy fried chicken my middle school friend always shared with me at lunch. Maybe it was the smoky dry ribs I devoured in that iconic basement barbecue restaurant, Rendezvous, in Memphis. Or the pimento cheese on soft, pale bread. Or the grits, shiny with bacon grease and sprinkled with grilled shrimp. Or the cornbread, which speaks for itself.

All I know is, one day I was criticizing the number of Confederate flags stuck to pick-up trucks and flying from flagpoles, and the next I was correcting the misinformed people I met in D.C. who still subscribed to antiquated Southern stereotypes. And then, one night, I said “y’all.” And meant it.

I’m not suggesting that I have become a Southerner. I’m not sure it’s an identity you can adopt, particularly when I’m still harboring a decidedly non-Southern accent. Rather, I like to think I’m a hybrid. I can appreciate the best of both worlds, and recognize the worst, too.

I cannot recall the first time I indulged in what was likely more than one serving of this layered delight, but my most fond memory of banana pudding is on a summer evening in Beaufort, eating banana pudding by the bowlful, often adding a spoonful of hot fudge or two. (We had no concept of restraint that summer.) A close second in the memory department is eating banana pudding in Munich last year, when the Icelandic volcano left me “stranded” in Germany.

My hostess loved it so much, I thought I’d take another stab at the creamy, Southern classic, served up for a European audience. And this time, I made the pudding completely from scratch. And I will also acknowledge Paula Deen for her contribution, as much as it pains me. Her original banana pudding recipe is here.

1) Heat a double boiler (or create your own with a heatproof bowl over a saucepan of water) on the stove. Meanwhile, mix together sugar and cornstarch in a bowl. Add sugar and cornstarch to the pot and slowly stir in milk. Let thicken slightly.
2) Take a few spoonfuls of the pudding and stir into the bowl containing the beaten egg yolks to heat (temper) the eggs so they won’t overcook in the pot. Then add the egg mixture to the pot and stir for another 2 minutes. Pudding should coat the back of the stirring spoon. Remove pudding from heat and let cool.
3) In a baking dish (9×9 works best, but I used a more rectangular baking dish and it was fine), alternate pudding, bananas and wafers, beginning and ending with pudding. Be generous with the banana slices–slices should be touching.
4) Top the pudding with whipped cream. Refrigerate until ready to serve.

Do you identify yourself regionally? If so, from what region? Do you think it’s possible to “become” Southern?

For every two weeks that a person is in Italy, he or she requires one week of recovery. It’s a little-known fact, but one should not engage in any mentally or physically challenging tasks immediately upon returning to one’s home country, including, but not limited to, food blogging. Following all that R&R, it’s important to slowly transition back into a schedule. After all, I had to fulfill many strenuous duties as a tourist in my two weeks in Italy:

– Checking out some famous buildings, statues and fountains

– Shuttling the kids around, and sometimes putting my super-sized sunglasses on their itty-bitty faces and deriving far too much amusement from it

– Eating food that other people cooked for me 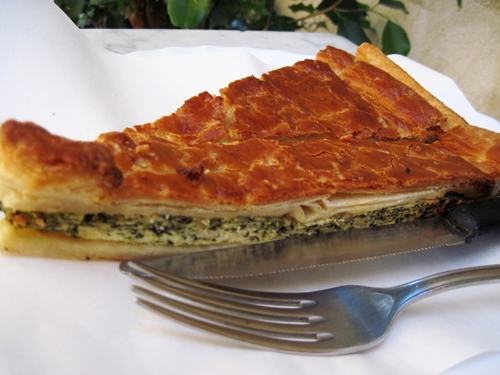 That last one has really done me in. I haven’t cooked in–please withhold your shock–two weeks. My Italy vacation began with the promise of infinite food inspiration and ended with sheer gluttonous laziness. “Why cook when Italians can do it for you?” I have often wondered in a post-pizza-and-gelato daze. There are few moments more joyous than watching your waiter weave his way toward you with a pizza the size of a Monopoly board, contentment washing over your sun-weary skin and carb-starved stomach when you realize that whole pie is for you, solely and exclusively. And you didn’t have to make it.

But, folks, I’m back. And I’ll be cooking again pronto.