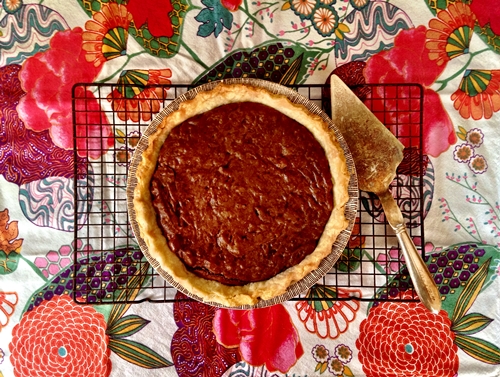 It feels appropriate to revive the blog with a recipe called “Tar Heel Pie.” I imagine the name has something to do with its North Carolinian origins, if not its fudgey consistency that could be considered tar-like if you were into making such unappetizing comparisons. Basically, imagine a flaky pie crust. Now imagine that pie crust filled with a pecan-laden brownie. That’s Tar Heel pie. (And you thought that particular food fantasy would never be realized. Silly you!)

I know I tend to get hyperbolic with some regularity, but this pie, after only one baking attempt and three tastings, is officially in my top 5 favorite desserts of all time. If you are planning on inviting me to any kind of event in the next few months, I will likely bring this pie. If you are not planning on inviting me to your event, more for me.

My recipe came from my dear friend Nancie McDermott, who has written an entire book about Southern pies. Check out the recipe here — I followed the recipe exactly, so no reason to paste it here!

Rather than using a store-bought crust, which I couldn’t find in a form that involved real butter, I made my own. It’s totally unnecessary, but I had a rainy day to kill. What better way to spend it than whipping up some pastry dough?

1) In a large bowl, combine flour and salt. You can then either cut in the butter until mixture resembles coarse crumbs, or grate in the butter using a cheese grater and mix into the flour and salt. (I typically freeze the butter first, then grate it, then freeze it again for a few minutes so that it stays really cold.)
3) Stir in water, a tablespoon at a time, until mixture forms a ball. Wrap in plastic and refrigerate for 4 hours or overnight.
4) Roll dough out to fit a 9 inch pie plate. Place crust in pie plate. Press the dough evenly into the bottom and sides of the pie plate. Finish with a crimped or scalloped edge.

This entry was posted in dessert and tagged chocolate, pecans. Bookmark the permalink.