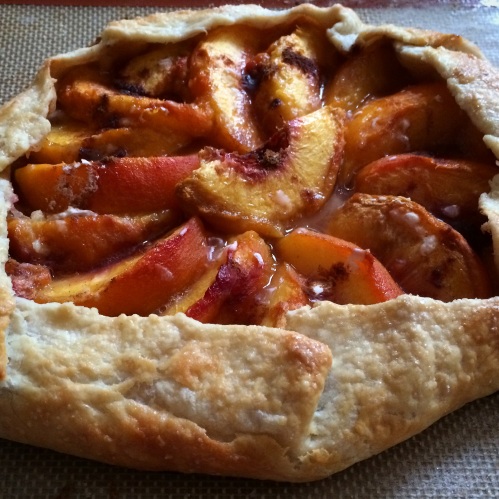 There’s a crisp edge to the breeze today, but we still had a few leftover peaches that were just begging to be baked. This dessert felt like a swan song to summer, and I can’t say I’ll be too sad to see it go.

Despite the fact that I’d gladly never hear the word “pumpkin spice” again, autumn remains my favorite season. This year, with the re-introduction of a work routine, there’s a pleasant cadence to my days.

Not to mention the re-introduction of chunky sweaters, leather boots, and flannel sheets. And a resurgence of a certain man’s beard and his plaid shirts. Nothing says fall like a good beard, amirite?

(Seriously though, please stop talking about pumpkin spice. Chai is a better spice blend, anyway. Plus, it does not purport to contain an ingredient that cannot actually be found in its ingredient list. There is no pumpkin in pumpkin spice, it’s just the mixture used to flavor overrated pumpkin foods like pumpkin pie. The concept of “pumpkin spice lattes” is akin to me serving a “s’mores milkshake” that contains no graham cracker or marshmallows, but hey, at least it has the chocolate part down! STOP THE MADNESS.)

But where were we? Peaches. Right. Peaches. Their season is far too short and they’re one of the foods that starts with “p” that I support.

1) Cut the butter into the flour with your fingers or with a stand mixer. Pour in the water slowly, until the dough begins to clump. (Mix for 30 seconds or less if using a mixer.)
2) Divide the dough in two and create two balls of dough. Wrap with plastic and compress into disks. Refrigerate for 1 hour.

1) Preheat the oven to 375 degrees. Remove one of the tart dough sections from the fridge and roll into a circle with a rolling pin until the dough is about 12 inches in diameter. Place on a cookie sheet lined with parchment paper or a Silpat and refrigerate for 10 minutes.
2) Combine the peaches, vanilla extract, cornstarch, cinnamon, and one tablespoon of sugar in a bowl.
3) Remove the dough from the fridge and arrange the peaches artfully upon it, leaving a border of 1 and 1/2 inches. Fold the border over the peaches to make a crust.
4) Mix the egg and water together and brush gently over the crust. Sprinkle the whole tart with the remaining two tablespoons of sugar. Place the tart on the lower rack in the oven and cook for 45 to 55 minutes until the crust is golden brown.

This entry was posted in dessert and tagged peaches. Bookmark the permalink.