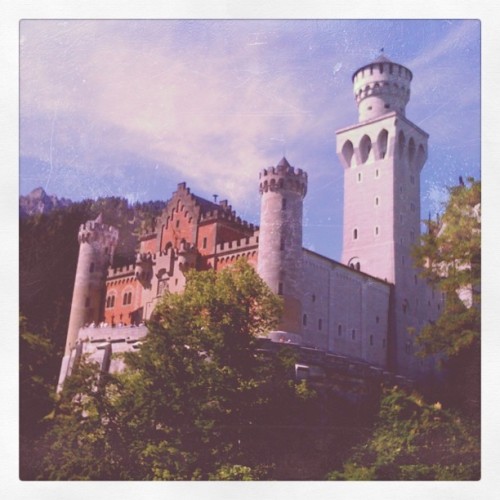 You know what I’d really love to do? Fill mason jars with the wonderful, restorative, inspiring atmosphere that is surrounding me at the moment and send them to everyone back home.

In lieu of that, a brief summary of my past week: Neuschwanstein Castle, lentil “burgers” (now three-year-old approved), a UNC friend’s visit, biergartens, more biergartens, bike rides through German countryside, Dachau, and late nights with new friends. Oh, and lots and lots of walking.

What I have not done nearly enough of is cooking. Eating, yes. Cooking, no. I could pretend it’s because I’m busy, but actually, it’s because I’m enjoying being fed. My cousin is an excellent cook who has provided me with all kinds of new recipes that you’ll see here shortly.

But, on Thursday, I’ll be the one who’s cooking. (And then I need to cook a whole lot more for the remainder of the summer.) What should I make?

That’s right. Get me in a foreign country renowned for its baked goods, and I’ll bake cupcakes that look like they came straight out of an all-American Martha Stewart cookbook.

After baking wedding cupcakes, I swore cupcakes off for, well, ever. Those suckers are so cloyingly sweet that I predicted my making them again would result in a lengthy sugar-induced coma, followed by my dramatic demise, frosting oozing out of every pore. I mean, I had nightmares about the last cupcakes I baked. I desperately want to move on to  a new baked-good food trend–perhaps whoopie pies, or macarons. Sometimes, however, my cupcake reputation precedes me. Or, as in this instance (and many others, frankly), I could not keep my mouth shut and, one afternoon, out poured my admission: I was in a class where my nickname was Cupcake. My cupcakes have won awards. My cupcakes bring all the boys to the yard. Et cetera.

This admission was followed by a shocking revelation: my family didn’t know what a cupcake was! As a self-assigned American Ambassador to Germany, I could not allow this ignorance to continue. Sure, the country already has yeasty soft pretzels, vibrant fruit tortes, and, my personal favorite, nuss-nougat croissants, but without cupcakes, Germany is a country still lacking in the ultimate vehicle for carbohydrates, butter and sugar.

Thus, I found myself baking cupcakes for one of my German family member’s birthdays. As much as I gripe about baking yet another dozen cupcakes, I derive great pleasure from the oohs and aahs that my cupcakes always elicit. Somewhere around the time that I take those little cakes out of the oven, they transform from the bane of my existence into my personal pride ‘n’ joy. Piping frosting on them is the closest I’ll ever get to being an artist.

My friend Kasey discovered this buttercream recipe, so I finally have a strawberry frosting I can be proud of, unlike last time. The recipe actually is Martha Stewart’s strawberry meringue buttercream, though I changed the wording in the directions to better represent how I interpreted the recipe, and included the European conversions I needed to make since I now lack proper measuring cups. I used the same chocolate cupcake base I always use.

Even I enjoyed the result of this cultural immersion experience. But, seriously, I need to learn how to make nuss-nougat-filled croissants before I ever delve into cupcake-making again. Recipe suggestions welcome!

1) Set a heatproof mixing bowl over a pot of simmering water. Stir in egg whites and sugar, whisking constantly until the sugar is dissolved and the mixture is a glossy white. Remove bowl from heat and beat egg whites with an electric mixer until the egg whites form stiff peaks and the mixture is cooled. (It has to be cool or the butter will melt!)
2) Slowly combine butter into the egg mixture a few tablespoons at a time, beating well between additions. Add vanilla, then stir in strawberry jam puree until the frosting is smooth.

I could tell you all about the 11 hour train ride I took from Raleigh to DC. Or the equally long flights from DC to London to Munich (cumulatively). Or how it’s been 60 degrees and raining all day.

Yes, I could tell you about all of those travel tragedies, but those stories would detract from the pure bliss I’ve derived from the following: spending time with excellent and generous hosts in DC and Munich, evading Icelandic volcano eruption #2 (unlike #1), learning German from a three year-old, being picked up from the Munich airport in a Porsche convertible, eating two-hour-long dinners with my family, having a floor of the house to myself, and finding out that I can still have an iPhone while I’m here. You know, the little things in life.

I plan to cook again in the very near future, promise. Last time I was here, I introduced my hostess to southern North American cuisine, in a food movement I called “Southern Germany, Meet the Southern USA.” I’m looking forward to continuing that same movement, particularly now that I’ve confirmed the presence of sweet potatoes in this country.

Any suggestions for what southern/American foods I should cook for my family?