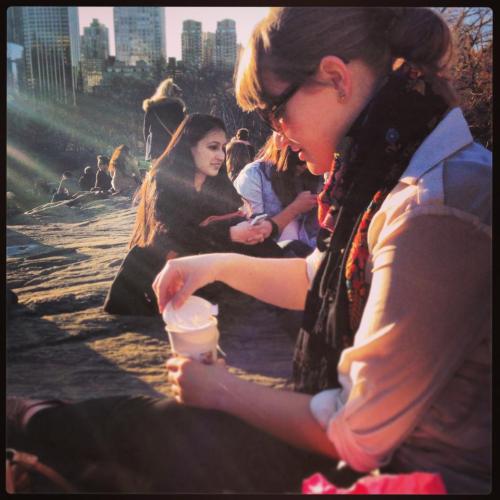 This follow-up post was intended to be a lot of things. Seven months ago, it was intended to thank you for the amazing response to my post about embracing being alone — to write about how lucky I am to be alone together with a community of people I can lean on. This post could’ve been about the heartbreaks, the search for a NYC partner in crime that has consistently proven fruitless and, well, depressing. This post could’ve also been about the sweltering summers that reek of trash and bodily fluids, or the time I found myself devastatingly lost in East New York, or about another batch of wedding cupcakes. (Despite my reservations, it always seems to come back to cupcakes for me.)

So now I find myself here, with this post that isn’t about any of those things, specifically, but that also ends up being about all of them, along with those best left unwritten. I am leaving the city. I am leaving the city because I have gained everything I needed from living here: the self-reliance, the much-needed checking of my ego, the perspective that comes from existing in a place where decadence and poverty are so starkly juxtaposed, and recognizing my own place of privilege and the great fortune I have had. And the meals. Oh, the meals.

These two years have been the hardest and loneliest years of my life, and I say that with the sincere gratitude of someone who managed to make it to 24 years old with minimal hardship (middle school and The Bowl Cut Era included). I don’t regret my decision to move here, nor do I criticize those who stay. I admire anyone who can, or must, make a life for herself here without collapsing under the stress of commuting and working and budgeting and just generally leading a life that, under non-NYC circumstances, could be considered normal, but that here comes with crowds and subways and oppressively tall skyscrapers and people who just don’t have the time. It’s just that this place no longer reflects my priorities, which include, but are not limited to, family, time for creative pursuits, and living in a bedroom that has at least one window. And a closet.

I came to this city for several reasons, some easier to articulate than others. There’s the food, of course. There’s the idea that upon graduating from college, a city holds the most promise and opportunity for a burgeoning professional, and NYC captures that ideal best of all. There’s the legacy that my great grandmother left by immigrating through Ellis Island, feeding into my intense desire to understand the people who came before me and the places their feet tread.

Now that I’ve spent time in my great grandmother’s city, I’m not entirely sure she would recognize what it’s become — certainly not her old neighborhood in Queens or the ever-growing economic disparity that hard work and pluck can’t mend. And all that professional promise fails to replace the family I left behind in North Carolina. The food, well, it will be almost as hard to leave behind as the friends I have found here.

This goodbye is really for them. I’ve lived in enough places that I should be getting better at goodbyes, but I’ve also lived in enough places to know that I never will. I have been blessed to meet a ragtag group of people who I believe to be the best in the city (let me know if you want their contact information), people who served as my city tour guides and confidantes and taste testers. They’re the ones who kept me sane in this crazy concrete jungle. So thank you and so long to my dear New York City friends for going out with me, staying in with me, and just generally being the kind of friends even Friends could not dream up. Please come down and visit any time. I’ll have cupcakes waiting.