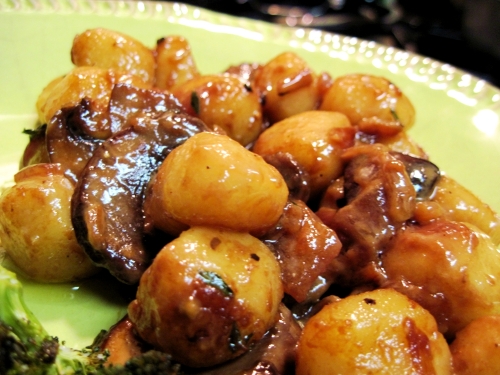 I can’t decide whether those pictures are appetizing or disturbing, but having already consumed this meal, I can honestly say that cooking this meal will have you salivating before you can say “gnocchi”–backward.

I bought truffle oil the other week in a moment of utter pretension combined with too much money in my bank account. You know, typical white middle-class problems. So, I jumped at the opportunity to drizzle truffle oil on something other than bread.

Side note: truffle oil is made from mushrooms, called truffles, and combined with olive oil; it is not made by slow pressing chocolate truffles until their luscious cocoa flavor gives way. Although that would also be delicious. (I just thought I’d clarify.)

I think the most obvious conclusion here is that the word truffle can only have a positive connotation. I’m thinking about naming my first born Truffle, actually. And she’ll be a really fantastic dancer known for her trademarked Truffle Shuffle. Just thinking out loud, here.

Anyway, this recipe is based on the one found here at Food & Wine online. I wasn’t about to buy vermouth after already investing in truffle oil, so I substituted three-buck Chuck. And I already had an onion, so I replaced the shallots, too. I’m still a student, after all. A student with truffle oil and thousands of dollars in student loans.

1) Heat the olive oil with the butter in a pan. Add the mushrooms and onions and cook over high heat, stirring occasionally, until browned.
2) Add the white wine and cook until evaporated. Add the stock, cream and thyme, season with salt and pepper; bring to a boil.
3) Meanwhile, in a large pot of boiling salted water, cook the gnocchi until they float to the surface, about 3 minutes. Drain well.
4) Add the gnocchi to the mushrooms and simmer, stirring, for 1 minute. Stir in some of the Parmesan. Place gnocchi mixture in a pan and top with remaining Parmesan.
5) Broil the gnocchi 6 inches from the heat for 2 to 3 minutes, until golden and bubbling. Drizzle with truffle oil and serve.