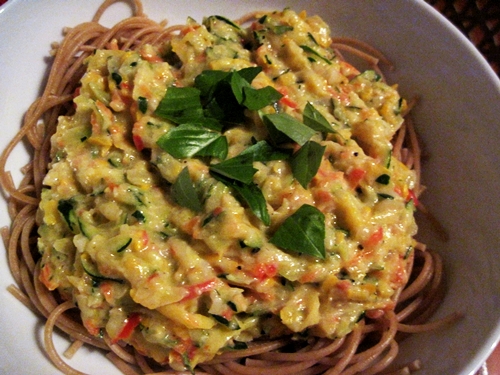 I’ve been keeping something from you.

More than a year ago, I was hanging out in Italy. Mostly just eating, but sometimes cooking. Obviously, my life tends to revolve around food as it is, but my fixation was only exacerbated by being in a place where food serves as a language of its own.

Once you make it, I imagine you’ll forgive me. Basically everything in here is easily substituted, too. Try it with eggplant. Try it with sour cream. Try it without any dairy at all. Then, let me know how it turned out!

1) Heat 1 tablespoon of olive oil in a pan over medium heat. Add zucchini, squash and red pepper. Cook for about 20 minutes, or until most of the water has been cooked off. Drain the vegetables.
2) Place the pan back on the stove and lower the heat to medium-low. Add the remaining tablespoon of olive oil and the tablespoon of butter. Stir in the garlic. Cook until light brown.
3) Stir in the well-drained vegetables until the mixture is very warm. Turn the heat to low and combine the mascarpone cheese. Remove from heat. Add salt and pepper.
4) Spoon sauce onto your favorite pasta and top with fresh basil. 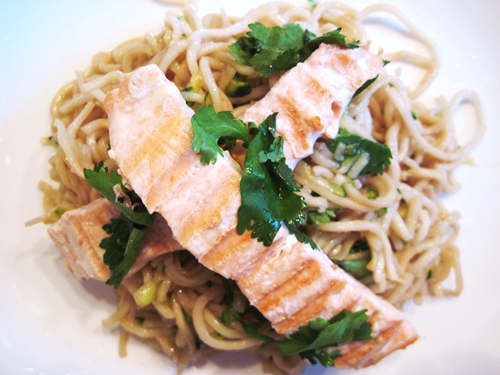 Typical. I leave in three weeks, and now the weather decides to act somewhat summery.

Then again, I leave in three weeks. I have plenty of time to remember what the sun feels like, and perhaps even don a bikini at an outdoor pool. Also on the agenda: more museums, more clubs, a lake visit, and a trip to Salzburg to pretend I’m in The Sound of Music. I’ll even attempt to take pictures of things other than food, but I’m not making any promises. I can only focus on so many interests, and food trumps scenic vistas any time–probably because they possess the power to make me salivate months after being taken. Mountain ranges do not.

This recipe is an Asian-inspired recipe from a cookbook written by an Australian cookbook author and translated into Germany. Oh, globalization. Incidentally, the cookbook is called something completely different in German, but I prefer the title My Spontaneous Kitchen to the original title since mine usually is, and it suits me. (On a purely tangential note, the German title for the movie Forgetting Sarah Marshall is Never Have Sex with Your Ex.)

Anyway, I’m basically infatuated with this meal. It’s perfect for summer–refreshing, brimming with fresh herbs and vegetables, and light, so long as you don’t consume as much of it as I did. Also, everything comes together in under 20 minutes. Think of it as ramen for grown-ups. (The ones who don’t want hypertension, at least.)

1) Set a pot of water to boil for the noodles and preheat a pan on medium heat for the salmon (you could also grill the salmon). In a large bowl, mix cilantro, mint, basil, zucchini, lime juice, soy sauce and 2 tablespoons of honey.
2) Cook noodles for 3 to 5 minutes. Drain and toss with the sauce. Taste noodles, then add more herbs as desired.
3)  Spread the remaining 2 tablespoons of honey on the salmon. Add salt and pepper. Cook salmon on the pan for 2 minutes on each side. Serve over noodles and sprinkle with more cilantro. 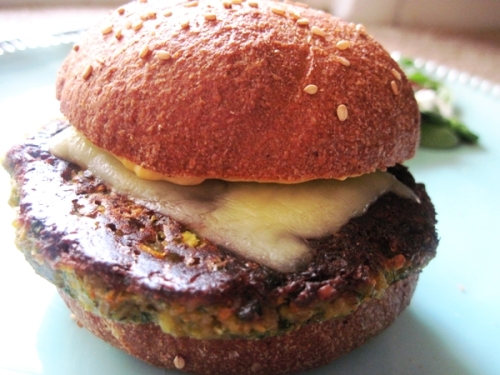 Today felt like spring in Chapel Hill. Fortunately, I had the ideal warmer-weather meal to pair with my day of porch sitting (among more productive pursuits)–a fresh sandwich chock full of veggies and protein and other Healthy Things That Actually Taste Delicious.

To be fair, I actually eat these lentil “burgers” year-round. They’re too tasty to be seasonal. They just seemed particularly relevant today.

The recipe was inspired by my friend Miri Leigh, who has a wonderful food blog and far more food expertise than I. She got the recipe from Mark Bittman, who has some of the best recipes around. Lots of brilliance in that bunch, I tell ya.

1) Place the lentils in a medium pot and cover with 1 inch of water. Bring to a simmer and cook, uncovered, until tender. (About 30 minutes.) Drain.
2) Pulse the garlic and scallions in a food processor until well-grated. Add the lentils and all remaining ingredients, except the breadcrumbs, into the food processor. Combine well. (Without a food processor, you just need to mash everything together. It’ll take a bit longer, but it’s worth the effort!)
3) Mix breadcrumbs into the mixture, then refrigerate for 30 minutes. The lentil mixture will be wet, but dries off a bit in the fridge.
4) Heat olive oil in a pan. Form patties with the lentil mixture and place in the hot oil for 2-3 minutes on each side, or until golden brown. (Once I’ve flipped mine, I add mozzarella cheese to the cooked side.) Place onto a paper towel-lined plate to remove excess oil.

Dessert can be decadent after such a nutritionally-balanced dinner. But that post is for tomorrow… 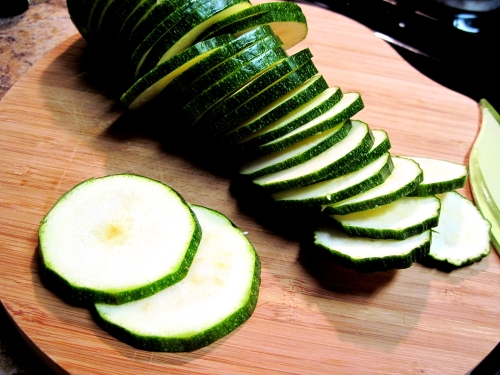 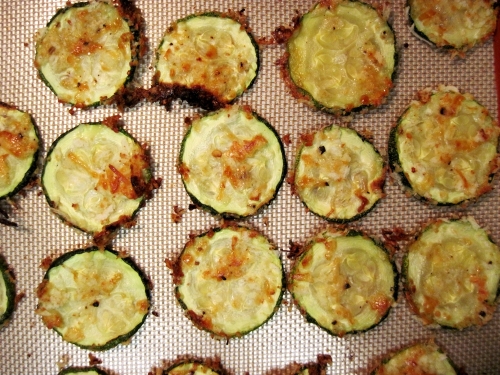 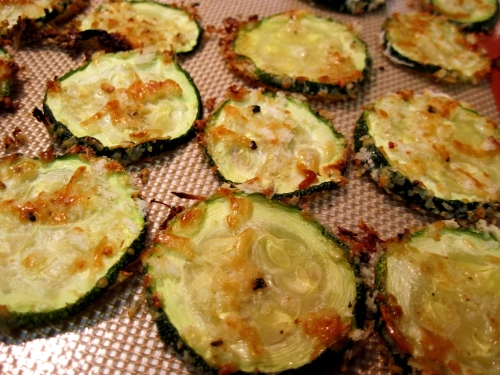 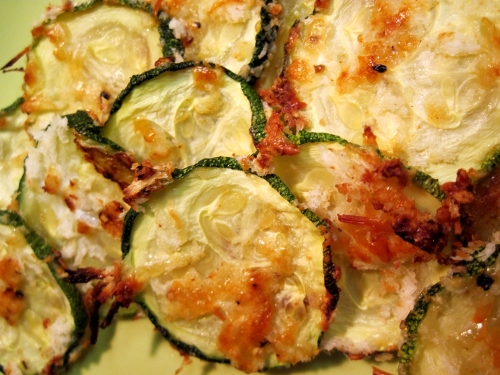 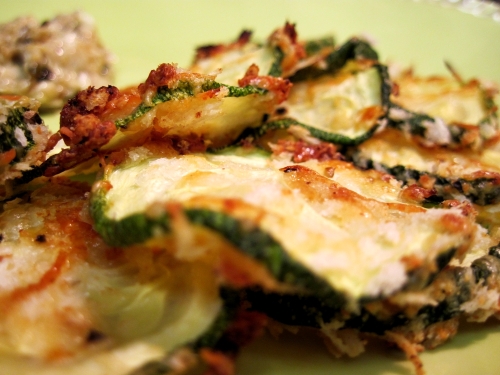 More courgette-y goodness. Paired with pesto aioli. These chips get crispy on the outside, but stay a little bit tender in the center. What a delightful way to eat your vegetables.

1) Wash zucchini and slice into 1/4 inch slices.
2) Mix the bread crumbs, Parmesan and seasoning in one bowl. Place the egg whites in another bowl.
3) Dip zucchini slices in the egg whites, then dip in the breadcrumb mixture, coating them evenly.
4) Spread zucchini out on in a single layer on the baking sheet. Cook at 450 degrees for 7 minutes. Turn zucchini over. Roast another 7 to 8 minutes, or until coating is crispy and golden brown.

Posted in side dishes 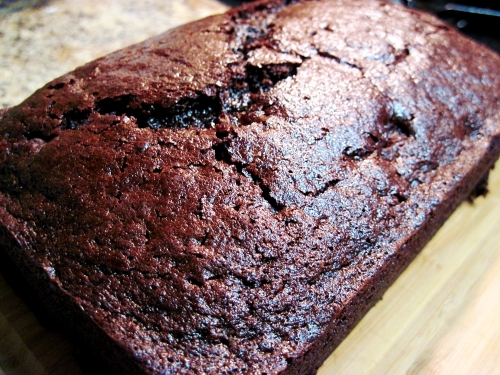 Courgettes. They sound so sophisticated, so French. Of course, when I first arrived in London, I stared dumbly down the produce section looking decidedly unsophisticated; I felt up several of the green squashes before confirming that courgettes are, in fact, zucchini. Turns out that the British are Francophiles, and I am just a woman who creeps people out while shopping for vegetables.

I made this bread only to give it away. (Hint: if you help me find a job, I’ll bake you something.) Yeah, you can call me Magnanimous Meghan. Because of the gift-like nature of this bread, I have not yet tasted it. (It is pending review by a very well-respected Yelper.**)

See? I have self-control. I really do. Excuse me while I go eat three chocolate chip cookies.

1) Combine oil, sugars and vanilla. Mix in eggs and shredded zucchini.
2) In a separate bowl, sift together flour, cocoa, salt, cinnamon, baking soda and baking powder. Slowly add dry to wet. Beat until combined. Mix in chocolate chips.
3) Scrape batter into a greased loaf pan, and bake at 350 degrees for 55 minutes, or until a toothpick pushed into the center comes out clean.

**Yelper and Meghan approved. Lawdy, is this bread divine. 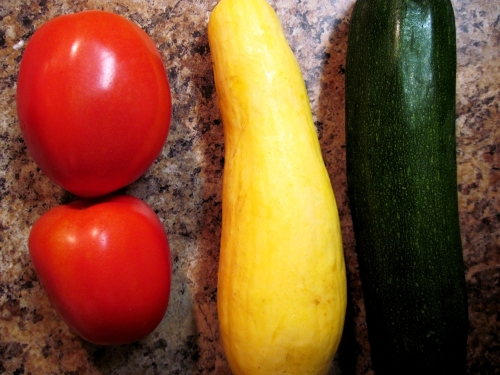 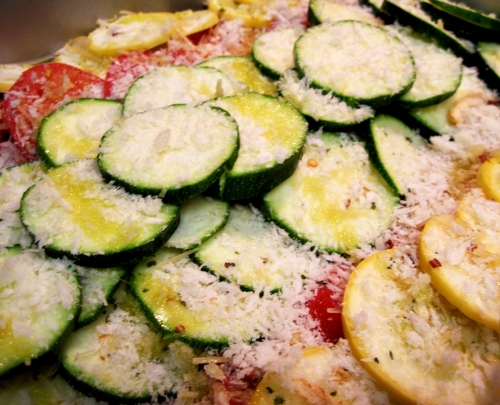 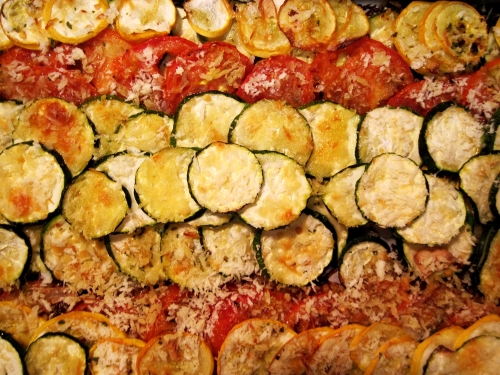 One woman’s trash is another’s treasure. Or, in this case, my mom’s surplus of squash is my opportunity to get a lil’ crazy in the kitchen. I need to know more people with CSA memberships. They have so much to give. Like vegetables. Especially as the summer comes to a close, I’m trying to find ways to throw those last lovely summer squashes into everything I consume.

So, I made a gratin. The word rolls off the tongue almost as deliciously as the meal tastes on the tongue. Sure, roasted vegetables are great, but when you add cheese and bread crumbs, there’s really no need to eat anything else. Unless you’re a lush like I am and put the gratin on top of pasta with walnut pesto.

The recipe came from Healthy Delicious. I’m kind of in love with that blog–yummy recipes. (And I won a Dutch oven from a contest held there. I admit my bias.)

1) Heat olive oil in a medium skillet set over medium heat. Add the onion and garlic and cook stirring occasionally, until golden brown and very soft — about 5 minutes. Stir in the thyme. Spread the onions in the bottom of a baking dish.
2) Layer the squash, zucchini and tomato in the dish. Alternate layers of vegetables with some cheese and herbs.
3) Top with the rest of the herbs de Provence and the cheese. Sprinkle a thin layer of panko bread crumbs over the top and drizzle with more olive oil.
4) Bake at 375 for 60 minutes. Let rest for 10 minutes before serving.

What recipes are you making to commemorate the end of the summer?

Posted in side dishes