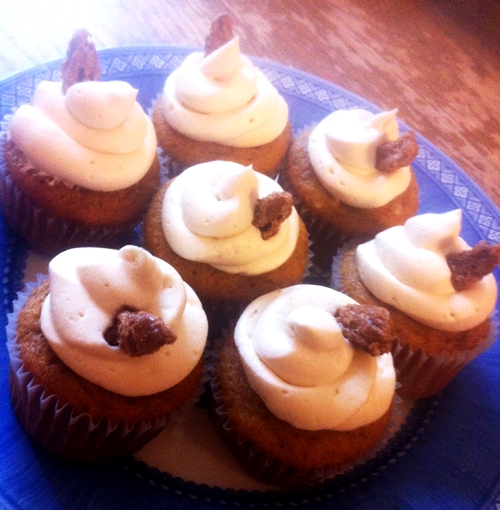 I know it’s been awhile.

Hopefully some sweet potato cupcakes will appease you. (For now.) 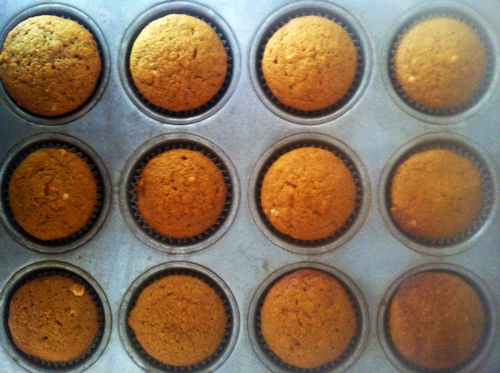 They are quite delightful, these moist little muffins topped with creamy frosting and crunchy pecans. 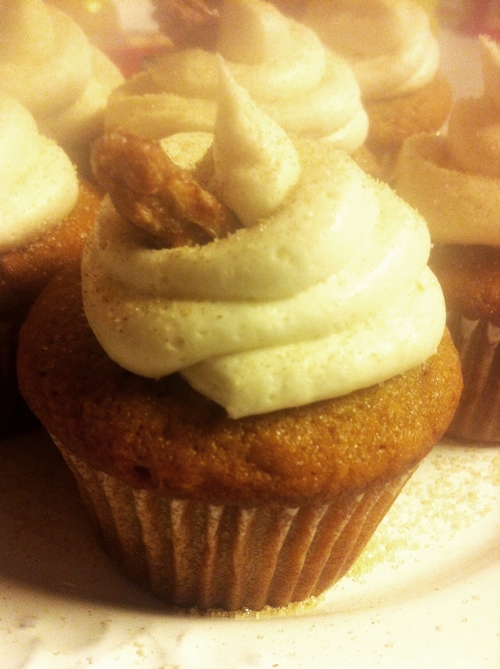 I’m currently testing recipes for a friend’s wedding. This friend, to be exact. These passed the test. Remember last time I made cupcakes for a wedding? I vowed only to do one wedding every two years.

I’m a woman of my word, it turns out. Except when that word involves promising to write more. That kind of thing is best left to chance.

Anyway, I know I should be posting recipes that help people keep their New Year’s resolutions, not actively attempt to break them. Alas, one of those recipes is best left to another day.

The original recipe for these cupcakes comes from some sort of Food Network cupcake challenge, but I’ve modified it to suit my tastes. (And the happy couple, of course.)

If you make them yourself, let me know how they turn out!

1) Preheat the oven to 350 degrees and line a few cupcake tins with paper liners.
2) In a medium bowl, whisk together the flour, cinnamon, baking powder, baking soda, salt, ginger and nutmeg. In a large bowl, whisk together the butter, brown sugar, granulated sugar and eggs. Slowly incorporate the dry ingredients and then the sweet potato puree.
3) Fill cupcake tin cup three-quarters full of batter. Bake until the tops spring back when touched and a toothpick inserted in the center comes out clean — 20 to 25 minutes. Let cool.
4) Once cooled, frost the cupcakes with the frosting, top with candied pecans, and sprinkle with cinnamon sugar.

1) Preheat the oven to 300 degrees. Grease a baking sheet with oil.
2) Beat the egg white in a bowl until frothy, then whisk water and the vanilla extract into the egg.
3) Stir the sugar, cinnamon and salt into the egg mixture, then stir in the chopped pecans until they’re fully coated.
4) Spread the pecans onto the baking sheet and bake in 20 minute intervals, stirring the pecans before placing them back in the oven. Continue baking for about an hour.
5) Allow the pecans to cool on the baking sheet.